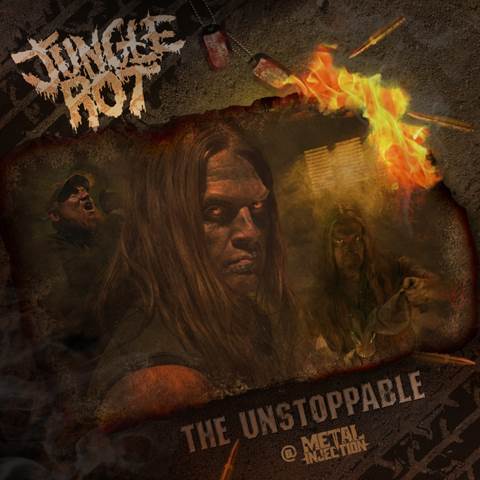 “Filming the point-of-view aspect from a tank made this video so much better,” states Matrise. “Instead of performing with instruments, we came up with the idea of each Jungle Rot soldier inside their own tank – mercilessly fighting and communicating to each other back and forth like killing machines. The lyrics are actually about a rolling death machine and she’s called The Unstoppable the bloodiest, most bad-ass beast you’ve ever seen! Doing the camo face paint is something that I wanted to do for a while and it really captured the whole feel we were going for. Prepare for a total alpha-strike, war-gore cloud of fear with a stop-at-nothing attitude in the thick of battle!”

On the re-issued album Matrise points out, “When we first released What Horrors Await in 2009, it was a one-time deal with a limited run. CD’s never made it to the US and were sold only in Europe where the previous label was based. What Horrors Await has always been Jungle Rot’s most sought-after album with fans often paying ridiculous amounts of money for it on eBay. It’s really been a rare and collectible album. We’re so glad it’s now out on our home label Victory Records, it will give everybody a chance to finally hear this monstrous release.”

Jungle Rot storm into Canada next week for their first shows of 2018, in anticipation of their tenth studio album (set for a spring release). “We feel lucky to be able to express ourselves through so many albums and I’m hoping our fans will never tire of meat and potatoes metal!” admits guitarist Geoff Bub, as bassist James Genenz adds, “We’ve got quite a fire under our collective asses and we’re psyched to get this album out! This is going to be a nasty record!”

Diamond Head – Lightning To The Nations