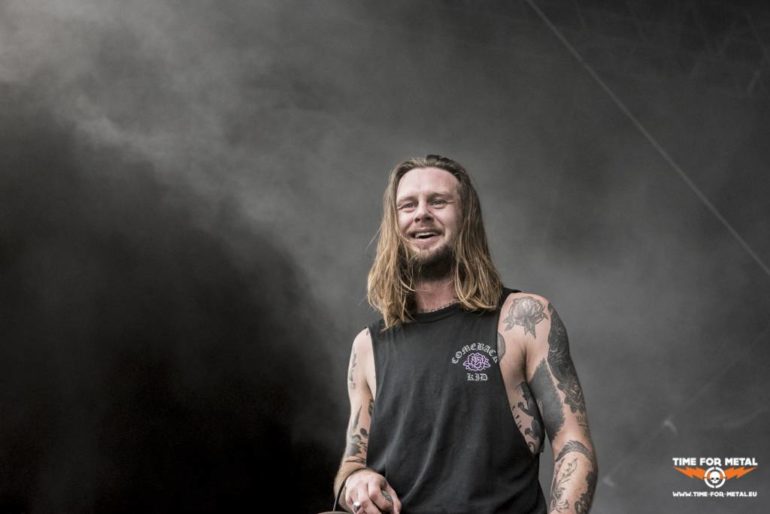 Interview with While She Sleeps about the new album „Sleeps Society“

Loz Taylor talks about DIY attitude, Crowdfunding and the collaboration with two legends

Artist: While She Sleeps 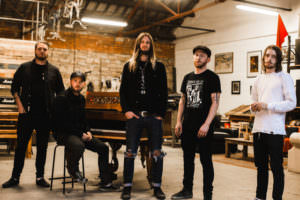 For a month now the successful Metalcore/Modern Metal package While She Sleeps has a strong new album out called Sleeps Society. Around the record, they had built their own „universe“. We had the chance to talk to their singer Loz Taylor to learn more about the DIY attitude and a win-win situation for musicians and fans.

Time For Metal / Florian W.:
Congratulations on your new record Sleeps Society. It has earned 8.7/10 points in our magazine and I think, it’s one of the strongest Modern Metal records of the year so far. When you read some good critics, are you proud, or do you go your own way no matter what?

While She Sleeps / Lawrence ‚Loz‘ Taylor:
Yo! Thanks for that … 8.7 ain’t bad at all hahaha! Appreciate your kind words. I mean, it’s nice to get recognition for anything you do in life isn’t it, no matter what it is. We’re always stoked to hear people are digging our music. Primarily we write for ourselves, I think that’s the only way you can initially.

But we definitely have our fans in mind whilst creating an album, we’re lucky that our fanbase is supportive and loyal. It allows us to explore our sound and be more experimental whilst writing.

Time For Metal / Florian W.:
When did the idea to build your own „universe“ around the Sleeps Society first come up? 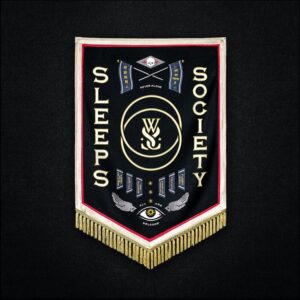 While She Sleeps / Lawrence ‚Loz‘ Taylor:
While She Sleeps have always been a very hands-on DIY band with that punk ethic. There has been a good number of times when the generic way of working with labels and management etc. just hasn’t worked out for us. So it’s not surprising that we find ourselves here.

Our record You Are We in 2017 was crowdfunded via Pledge. It was the first time, we decided to step out alone put it all on the line and produce a record completely funded by our fans. It was a very successful campaign – thanks to our fans. I think this is what actually birthed the idea for the Sleeps Society.

We needed a way to make the foreseeable future of our band sustainable. With physical sales now being non-existent and streaming bringing in next to no revenue we needed to find a sustainable way to balance this with the demand for our band. If you want to check out the Sleeps Society or support us, further head to our website and check out all the benefits, you will receive for your subscription.

Time For Metal / Florian W.:
The Sleeps Society is on Patreon. Do especially new bands have to cut off from the outdated truth about the music industry – going new ways to survive?

While She Sleeps / Lawrence ‚Loz‘ Taylor:
We believe that the current music industry is not working for the more underground genres Metal, Punk, Rock, Grunge etc. – the more indie genres. These genres are the lifeblood of our music scenes, but it can be very hard to sustain a career now that streaming is 95 % of how we digest our music. Bands are having to find ways to move with the times, but I think the balance needs to come for both sides of the coin if you will.

We believe that our Patreon model is a great way for bands to reach out to their fan base and help make things sustainable. The fans pay a little more but in return can receive a lot more benefits and altogether have a closer relationship with the bands –– that’s a win-win situation. We believe, new and upcoming bands can use this model as well as established ones.

Time For Metal / Florian W.:
What can fans expect from the concept behind the Sleeps Society?

While She Sleeps / Lawrence ‚Loz‘ Taylor:

Time For Metal / Florian W.:
You have collaborated with Simon Neil (Biffy Clyro) on Nervous and Deryck Whibley (Sum 41) on No Defeat For The Brave. How did you get in touch with these guys?

While She Sleeps / Lawrence ‚Loz‘ Taylor:
Yes! We are so stoked to have Deryck and Simon involved –– both great vocalists and frontmen.

We heard on the grapevine from a lighting guy a few years back on a Bullet For My Valentine support tour that Simon from Biffy Clyro liked While She Sleeps. At the time we were like “no fucking way hahaha!”

We were listening to the demo of Nervous and thought how amazing Simon’s voice would be on the track as it’s very melodic and anthemic. He came back and said he’d love to be involved. Simon was an amazing guy to have involved with; so positive and humble, a very reassuring character to have worked with.

At one time or another, each band member of While She Sleeps has been a fan of Sum 41. We reached out to Deryck to see if he would like to be a part of the new album. Initially, he told us that he would have loved to work with us, but with Covid and family obligations, he said that he wouldn’t have the time. When he heard the song demo we had written for No Defeat For The Brave he came back and was so stoked on the jam he jumped in the studio and got involved. What a legend! He sounds great on that track. It was great to work with both guys, and they killed their parts.

Time For Metal / Florian W.:
How did it come to the „Sleeps Society choir“ on Call Of The Void, and what are the lyrics about?

While She Sleeps / Lawrence ‚Loz‘ Taylor:
We wanted to ask the Sleeps Society to be involved in something special on this record as it’s the Society that has made this record possible.

We had the idea for them to send in recordings of themselves singing lyrics from the first-ever song we had written together Crows – Give Me Your Hand This Is The End.

It was great to celebrate the Society involvement in this record. And really cool that it feels full circle from The North Stands For Nothing record to the community we have surrounding us now.

Time For Metal / Florian W.:
When I get new stuff from a Metalcore band, my thoughts are always like: „Please, don’t do too much dance-pop stuff, instead of doing some hard shit“. Do you have found your perfect mixture of old stuff and new influences?

While She Sleeps / Lawrence ‚Loz‘ Taylor:
While She Sleeps always wanted to create our sound and I think we’ve achieved that. We wanted to step away from being just a Metalcore band and show listeners what else we have to offer.

I think this makes it exciting for our fans and helps us progress as musicians. We want to be able to create what we want. When we want to do it with no boundaries or reservations, if something excites us now we just go for it. As individuals, we all like tons of different genres and bands, and we want to keep experimenting and progressing whilst still harnessing what we’ve had all along. I think we are achieving this.

Time For Metal / Florian W.:
Big festivals, a sold-out show at the Brixton Academy, hundreds of thousands of views on YouTube, and now you have your own Society: Do you still have goals for the musical future?

While She Sleeps / Lawrence ‚Loz‘ Taylor:
I know crazy right … I think the 14-year-old me would have a nose bleed if you told me this back then. I think now we just want to have touring back to normal, so we can play tour fans worldwide and continue to be a band until were 50 years old hahaha!

Time For Metal / Florian W.:
Since we are just starting a column on the „best albums of all time“, I would be interested in your top three all-time favourites. Your three albums for a desert island, so to speak.

Time For Metal / Florian W.:
Thanks again for your time. It was a pleasure for me. My last question is: Why do our readers have to listen to Sleeps Society, even if they’re not into some Modern Metal stuff?

While She Sleeps / Lawrence ‚Loz‘ Taylor:
I think that if you are not a genre snob and open-minded in terms of Punk, Metal, Rock, there’s definitely something in the record for everyone. CHECK IT OUT!

Go to the review for Sleeps Society:

While She Sleeps – Sleeps Society