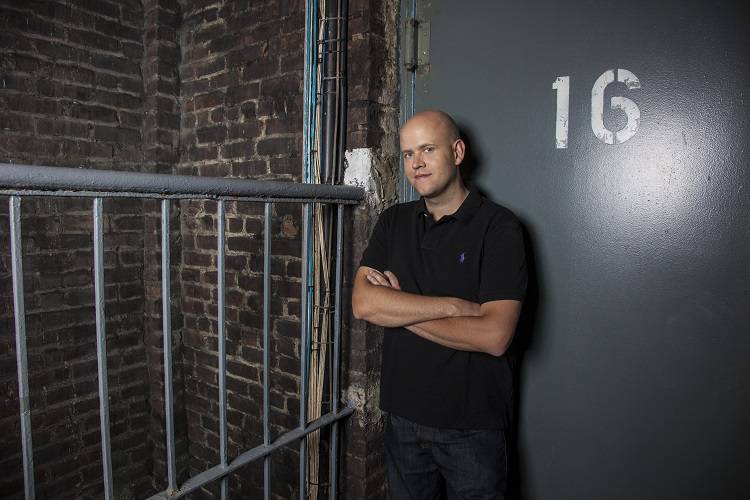 Taylor Swift is absolutely right: music is art, art has real value, and artists deserve to be paid for it. We started Spotify because we love music and piracy was killing it. So all the talk swirling around lately about how Spotify is making money on the backs of artists upsets me big time. Our whole reason for existence is to help fans find music and help artists connect with fans through a platform that protects them from piracy and pays them for their amazing work. Quincy Jones posted on Facebook that “Spotify is not the enemy; piracy is the enemy”. You know why? Two numbers: Zero and Two Billion. Piracy doesn’t pay artists a penny – nothing, zilch, zero. Spotify has paid more than two billion dollars to labels, publishers and collecting societies for distribution to songwriters and recording artists. A billion dollars from the time we started Spotify in 2008 to last year and another billion dollars since then. And that’s two billion dollars’ worth of listening that would have happened with zero or little compensation to artists and songwriters through piracy or practically equivalent services if there was no Spotify – we’re working day and night to recover money for artists and the music business that piracy was stealing away.

When I hear stories about artists and songwriters who say they’ve seen little or no money from streaming and are naturally angry and frustrated, I’m really frustrated too. The music industry is changing – and we’re proud of our part in that change – but lots of problems that have plagued the industry since its inception continue to exist. As I said, we’ve already paid more than $2 billion in royalties to the music industry and if that money is not flowing to the creative community in a timely and transparent way, that’s a big problem.   We will do anything we can to work with the industry to increase transparency, improve speed of payments, and give artists the opportunity to promote themselves and connect with fans – that’s our responsibility as a leader in this industry; and it’s the right thing to do.

We’re trying to build a new music economy that works for artists in a way the music industry never has before. And it is working – Spotify is the single biggest driver of growth in the music industry, the number one source of increasing revenue, and the first or second biggest source of overall music revenue in many places. Those are facts.  But there are at least three big misconceptions out there about how we work, how much we pay, and what we mean for the future of music and the artists who create it. Let’s take a look at them.

Myth number one: free music for fans means artists don’t get paid. On Spotify, nothing could be further from the truth. Not all free music is created equal – on Spotify, free music is supported by ads, and we pay for every play. Until we launched Spotify, there were two economic models for streaming services: all free or all paid, never together, and both models had a fatal flaw. The paid-only services never took off (despite spending hundreds of millions of dollars on marketing), because users were being asked to pay for something that they were already getting for free on piracy sites. The free services, which scaled massively, paid next to nothing back to artists and labels, and were often just a step away from piracy, implemented without regard to licensing, and they offered no path to convert all their free users into paying customers. Paid provided monetization without scale, free reached scale without monetization, and neither produced anywhere near enough money to replace the ongoing decline in music industry revenue.

We had a different idea. We believed that a blended option – or ‘freemium’ model – would build scale and monetization together, ultimately creating a new music economy that gives fans access to the music they love and pays artists fairly for their amazing work. Why link free and paid? Because the hardest thing about selling a music subscription is that most of our competition comes from the tons of free music available just about everywhere. Today, people listen to music in a wide variety of ways, but by far the three most popular ways are radio, YouTube, and piracy – all free. Here’s the overwhelming, undeniable, inescapable bottom line: the vast majority of music listening is unpaid. If we want to drive people to pay for music, we have to compete with free to get their attention in the first place.

So our theory was simple – offer a terrific free tier, supported by advertising, as a starting point to attract fans and get them in the door. And unlike other free music options – from piracy to YouTube to SoundCloud – we pay artists and rights holders every time a song is played on our free service.  But it’s not as flexible or uninterrupted as Premium. If you’ve ever used Spotify’s free service on mobile, you know what I mean – just like radio, you can pick the kind of music you want to hear but can’t control the specific song that’s being played, or what gets played next, and you have to listen to ads. We believed that as fans invested in Spotify with time, listening to their favorite music, discovering new music and sharing it with their friends, they would eventually want the full freedom offered by our premium tier, and they’d be willing to pay for it.

We were right. Our free service drives our paid service. Today we have more than 50 million active users of whom 12.5 million are subscribers each paying $120 per year. That’s three times more than the average paying music consumer spent in the past. What’s more, the majority of these paying users are under the age of 27, fans who grew up with piracy and never expected to pay for music. But here’s the key fact: more than 80% of our subscribers started as free users. If you take away only one thing, it should be this: No free, no paid, no two billion dollars.

Myth number two: Spotify pays, but it pays so little per play nobody could ever earn a living from it. First of all, let’s be clear about what a single stream – or listen – is: it’s one person playing one song one time. So people throw around a lot of stream counts that seem big and then tell you they’re associated with payouts that sound small. But let’s look at what those counts really represent. If a song has been listened to 500 thousand times on Spotify, that’s the same as it having been played one time on a U.S. radio station with a moderate sized audience of 500 thousand people. Which would pay the recording artist precisely … nothing at all. But the equivalent of that one play and it’s 500 thousand listens on Spotify would pay out between three and four thousand dollars. The Spotify equivalent of ten plays on that radio station – once a day for a week and a half – would be worth thirty to forty thousand dollars.

Now, let’s look at a hit single, say Hozier’s ‘Take Me To Church’. In the months since that song was released, it’s been listened to enough times to generate hundreds of thousands of dollars for his label and publisher. At our current size, payouts for a top artist like Taylor Swift (before she pulled her catalog) are on track to exceed $6 million a year, and that’s only growing – we expect that number to double again in a year. Any way you cut it, one thing is clear – we’re paying an enormous amount of money to labels and publishers for distribution to artists and songwriters, and significantly more than any other streaming service.

Myth number three: Spotify hurts sales, both download and physical. This is classic correlation without causation – people see that downloads are down and streaming is up, so they assume the latter is causing the former. Except the whole correlation falls apart when you realize a simple fact: downloads are dropping just as quickly in markets where Spotify doesn’t exist. Canada is a great example, because it has a mature music market very similar to the US. Spotify launched in Canada a few weeks ago. In the first half of 2014, downloads declined just as dramatically in Canada – without Spotify – as they did everywhere else. If Spotify is cannibalising downloads, who’s cannibalising Canada?

By the same token, we’ve got a great list of artists who promoted their new releases on Spotify and had terrific sales and lots of streaming too – like Ed Sheeran, Ariana Grande, Lana Del Rey and alt-J. Artists from Daft Punk to Calvin Harris to Eminem had number ones and were on Spotify at the same time too.

Which brings us back to Taylor Swift. She sold more than 1.2 million copies of 1989 in the US in its first week, and that’s awesome. We hope she sells a lot more because she’s an exceptional artist producing great music. But she’s the only artist who has sold more than a million copies in an album’s first week since 2002. In the old days, multiple artists sold multiple millions every year. That just doesn’t happen any more; people’s listening habits have changed – and they’re not going to change back. You can’t look at Spotify in isolation – even though Taylor can pull her music off Spotify (where we license and pay for every song we’ve ever played), her songs are all over services and sites like YouTube and Soundcloud, where people can listen all they want for free. To say nothing of the fans who will just turn back to pirate services like Grooveshark. And sure enough, if you looked at the top spot on The Pirate Bay last week, there was 1989…

Here’s the thing I really want artists to understand: Our interests are totally aligned with yours. Even if you don’t believe that’s our goal, look at our business. Our whole business is to maximize the value of your music. We don’t use music to drive sales of hardware or software. We use music to get people to pay for music, and we pay nearly 70% of all our revenue back to you. more we grow, the more we’ll pay you. We’re going to be transparent about it all the way through. And we have a big team of your fellow artists here because if you think we haven’t done well enough, we want to know, and we want to do better. None of that is ever going to change.

We’re getting fans to pay for music again. We’re connecting artists to fans they would never have otherwise found, and we’re paying them for every single listen. We’re not just streaming, we’re mainstreaming now, and that’s good for music makers and music lovers around the world.

Death Has Spoken – Call Of The Abyss