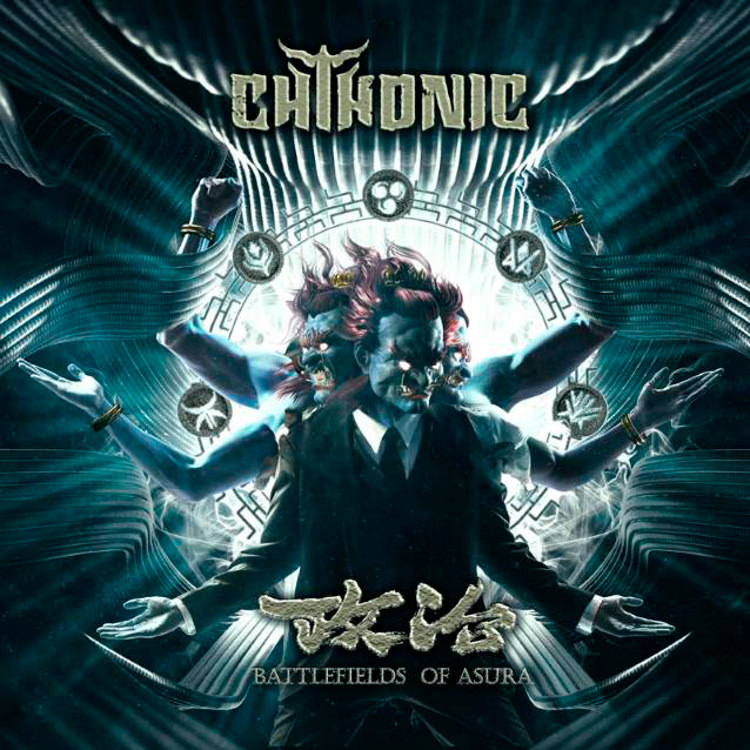 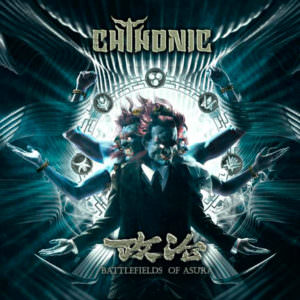 I am very glad that just like on the occasion of the release of your last album Bú-Tik you now have the time to talk about Battlefields Of Asura, which will be released in a few days.

It’s been five years since the release of Bú-Tik, how did you spend the time between those both albums?

In the past few years, I’ve been helping to organise large music festivals in Taiwan, and helped Taiwanese singers and bands of different genres to perform overseas. I became a mother last year, it’s quite energy-consuming, but I feel grateful.

I’ve been doing what I’ve always been doing–I run my own studio, and took part in music production for many Taiwanese bands. I also spent more time to be with another band I’m in, the Infernal Chaos.

I sepnt more time in running my business in music education. I opened more schools and recruited more students.

Like Jesse, I also run a studio. But mine is in Taichung and his is in Taipei. I’m also becoming a father next year.

As already mentioned, Battlefields Of Asura is about to be released, so I would like to focus on that. Let’s start with the cover. Before listening to the album, what’s the message of the artwork and who is the artist?

Asura is an Asian god who has 3 heads and 6 arms and is always fighting. Battlefields of Asura is written in Kanji characters as „修羅場„, and it means harsh battlefields. The cover art is an appearance of Asura with modern suit. We think in modern world, many fields of the society are all like Battlefields of Asura. Such as political field, financial field….etc..

On Battlefields Of Asura we found eleven songs with a total length of approximately 40 minutes. Can you tell something about the development of the album? How long are you already working on the new songs?

After the 2013 album Bu-Tik, we’ve been accumulating inspirations and stories. The song-writing was once paused when Freddy was involved in organising a new political party in 2015 and was elected to the Parliament in the next year, but during the Lunar New Year holidays in 2017, Freddy started looking at what he has accumulated so far. And he found that what he has been through in these past few years have given him a lot of emotions–joy, anger, sorrow, and happiness–and these accumulated emotions made writing songs smooth like never before. So after the Lunar New Year holidays last year, he has finished the basics and the framework of the songs. And Jesse joined the song-writing process to arrange all the materials with Freddy, and all the other 3 members have gotten involved step by step ‚till September 2017 when we finished all the song-writing and started to record them.

Is it difficult to combine this typical Asian sound with the heaviness of Metal? Who is mainly responsible for the songwriting?

Freddy and Jesse are the main writers. In our early albums, we usually wrote metal structures first, and added some Taiwanese elements at last. But since 2011 album TAKASAGO ARMY, we have tried the opposite way which was to write Taiwanese melodies and materials first, and make them heavier and heavier. This way is much more natural for us. And this new album is the third one since we tried this way, and it’s not too difficult any more, we think it’s the most mature one. We blended Taiwanese melodies with metal very smoothly and naturally.

Can you please give us a track-by-track-commentary for Battlefields Of Asura?

Sure, here they are:

This song represents the most commonly seen goddess in Taiwan, Ma-tso the Goddess of the Sea, or “Mazu” in Mandarin. The lyrics encourages people to bravely venture into the unknown world, and explore into the future. We inevitably would have fear and worries sometimes, and we may not know where to go, or stop where we are. But sometimes we actually do know our destination, we’re just being held back by our negative emotions. In that case, all we need is the courage to go forward.

Flames upon the Weeping Winds

This song represents Thai-tsu-ia, the god who dares to resist and has the ability to resurrect. Thai-tsu-ia is known as “Nezha” in Mandarin. Thai-tsu-ia is an important figure in Taiwan’s folk culture, and new images of Thai-tsu-ia, such as the Electric-Techno Neon Gods, have constantly been created. Thai-tsu-ia may have originally come from the god Nowzar in Persian myth. The message I wanted to deliver through the song is that we have to be courageous enough to resist authority, and grow bigger, stronger, and more brave even in failure.

This song represents the God of War in Taiwanese folk belief, Te-ia-kong, or “Xuantian Shangdi” in Mandarin. Te-ia-kong is able to control the skies, and deploy heavenly troops to engage in large-scale warfare. Although the song appears to encourage people to do their best to wipe out the evil, but what I had in mind when writing the song is that we should not just go with the flow. Especially when facing human rights issues like transitional justice, we should do whatever we can to recover the truth about that the state had tried to cover up.

Souls of the Revolution

This song is about how the powers of the deities have possessed a flag. Anyone who holds up the flag could command the wind and the rain, and fight against the evils. It’s worth mentioning that our good friend Randy Blythe, the lead vocalist of Lamb of God, appeared as a guest singer for the song. Listen carefully to find out which parts were sung by him.

This song represents Ong-ia-kong in Taiwanese folk belief. Ong-ia-kong is known as “Wangye” in Mandarin. Ong-ia-kongs in different places around Taiwan have different stories and contexts. The lyrics focuses on the ritual of burning of the wooden boat. Those who are interested may look it up! There are always regrettable memories in our lives that make it so hard to move forward. We may need greater power to cut away those regrets than moving forward.

This song represents Kuan-im-ma or Avaloki tesvara, known as”Guanshiyin” in Mandarin. In Tibetan Buddhism, people believe that the Dalai Lama is the embodiment of Avalokitesvara. We always face new births and deaths. We will eventually come to realise that we are no more than a small piece of stone in the flow of history that occupies a nonsignificant space in the universe. But this doesn’t mean our lives are nothing, but connected with all the beings. So I believe that we should always bear benevolence and compassion.

This song represents Sing-hong-ia, the guardian god of cities–or of the nation. The core message of the song is solidarity–solidarity with all the people who are alive at present, and with the souls of those who have passed away. That solidarity then should become a sense of community. I think this is something that all repressed peoples need.

This is the last song that accumulates all godly powers, and connects to the birth of Tsing-guan, and to our 2008 album Mirror of Retribution. The song expressed our expectation for new births, the quest for hope, and the helplessness in doing something that cannot be done. Hong Kong singer Denise Ho sings parts of the song with her voice that’s filled with righteousness. Everyone would feel the enthusiasm when you listen to it.

For our German readers and for the fans of Bú-Tik, what can they expect of this new journey through Battlefields Of Asura? Are there any parallels? Did you rethink the concept of the album? Do the expectations, especially in your home country, weigh heavy on your shoulders?

Yes, like the answer above, new album’s song-writing process and direction is quite similar but more mature than Bú-Tik. Metalheads who like Bú-Tik will definitely like Battlefields of Asura even more! And it has been 5 years since Bú-Tik, so of course, we have felt the expectations from fans a lot. But we have tried to stay easy and worked on this album smoothly.

We could already listen to the new album and are really enthusiastic about it. After this kind of cinematic introduction there is a lot of atmosphere. Further you extended the choral and orchestral accompaniment to allow some parallels to Cradle of Filth or Dimmu Borgir. Can you confirm this statement of my colleague?
Chthonic:

Choral and Orchestral accompaniment has always played quite important parts of our music, especially we need them to play Taiwanese melodies to emphasize our characteristic, as to choir and orchestra, it’s not only Chthonic to use that but Coldplay or even Kendrick Lamar use that in the music too. COF and Dimmu Borgir are great bands, but we have our own melody and stories inside our blood which related to our culture and that gives us an road to create our own kind of music.

Time For Metal / Rene W.:
In Taiwan you are superstars, if you can put it that way, and are considered to be the most successful band from your home country. How can I imagine that? Can you still walk the streets without being recognized and having to take pictures with the fans?
Chthonic:

Since we always put on makeups on stage, CJ and Dani even have their mask on it, so it’s not that easy for people to recognize our faces. But after Freddy has been elected as a MP in 2016, he has been often recognized on street. And he is always nice with people taking pictures with him.

Time For Metal / Rene W.:
You already have been in Europe, and I attended one of your shows at RockHarz a few years ago. What are the main differences between Asia and Europe, and what do you like better in which country?
Chthonic:

Metalheads in Asia are a bit shy and polite. Many of them in live stand still and bang their heads. But they also understand the stories behind our music better, so sometimes they have very cool reactions during our lives, such as holding banners, or throwing something on stage to ask us have some reacts. In Europe, fans headbang, mosh, surf, and sometimes start fist-fights with others. It’s very difficult to compare which country is our favorite. They are just different and energizing us in their own ways.

Time For Metal / Rene W.:
Despite your early stagetime at Rockharz a lot of people attended your show. In which way does it inspire you as an artist, if you are far away from your home country, you are considered as a newcomer and still you play in front of a „full house“ at noon?
Chthonic:
We don’t feel any thing strange! We love to play for people who enjoy our music!
Time For Metal / Rene W.:
Are there any plans after the release of Battlefields Of Asura, maybe some shows? Will you do a tour through Europe, or will you play some festivals again next year?
Chthonic:

Since Freddy’s a MP now, it doesn’t seem like we can have time to tour as much as we did before. But we would try our best to take part in festivals!

Time For Metal / Rene W.:
Thank you very much for this once again very informative interview, and I wish you much success with the new album.

In Dying Times – Face Of Inhumanity