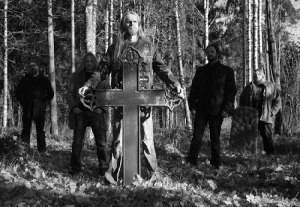 Time for Metal/holopain: Hi Devil, though you are not completely new in the metal business, you are described by several magazines and journalists as „the world´s youngest old band“. In what way does this description apply to you and how far can you find yourself in this quotation?

Devil/Stian: Hi Time For Metal! Well, I think we just have to approve of the frase „the world’s youngest old band“, because it was us who wrote it, haha! But the meaning behind it was that even though the band was formed as late as in 2009, we strieve to catch the mood of the roots of heavy metal back in the 70’s and early 80’s. I don’t think we’re gonna stick to the frase, though, because new bands with the same purpose emerge almost every day.

Time for Metal/holopain: In the Rock Hard magazine 287 you said, that you don´t identify with bands that purposely use an occult/evil background and that the band´s message has to do with good and evil. Can you explain this in detail?

Devil/Stian: I’ll try, at least. We are not on any crusade for the dark side, like it seems certain other bands are. We are merely here to show you all sides of stuff, and tell you the stories. Any choice in life is based upon a calculation of how much good it does. We don’t want to tell you what to choose, but we like to show you how much there is to choose from. On a storyteller’s night, we’d be the old wanderer in the rocking chair, telling his stories, whilst other bands seem to rather wanting to be sitting around on the floor, sucking in the inspiration. And both things are all right, I don’t say otherwise, but we have taken the position of the storyteller, not the guide.

Time for Metal/holopain: Where do you draw the line between bands like Devil and for example The Devil´s Blood, who not only try to transport and act out Satanism on stage/in their lyrics but seem to surround themselves with a murky image deliberately? How serious are those bands?

Devil/Stian:I have no idea. We really haven’t met those bands, so I can’t tell what lies beneath their musical expression. But for us, we are too old, lazy and thirsty to consider having an image besides the life we live. What you see of Devil is what you get. After playing in London, someone mentioned our „out of the cave“ image. That was fun, haha. Appearantly we look somewhat neanderthal, also in our ordinary life, as teachers, husbands, fathers and employers. I like that.

Time for Metal/holopain: Why exactly does the band Devil so strongly refer to the classic Hard Rock/Metal Bands of the 70´s? Is it a good way of becoming famous and producing music that is currently very popular in the scene or is it simply because you don´t have any musical role models in the present metal scene that you can link with?

Devil/Stian: It’s about finding back to one’s roots, I think. We’re in our 30’s now, closing in on 40, and it is more attractive for us to explore where we came from than trying to catch up with the kids of today. That being said, we don’t listen much to modern genres either, such as metalcore or other new stuff. We like new bands, but not new styles. But there are great people in the scene today as well, I guess. For instance I think people like Dave Grohl, Michael Åkerfeldt and Fenriz says and does a lot of smart and interesting stuff, but I wouldn’t play their music. As for being famous, that’s not a goal. But if we could live of DEVIL, it would of course be a victory for us, and a sign of the band having done something right. One shouldn’t be afraid of succeeding or making an impact. The great artists are those with visions.

Time for Metal/holopain: Is the present metal scene in a stalemate in terms of promoting musical talents?

Time for Metal/holopain: Do you think bands like Devil, Ghost, Graveyard or the Devil´s Blood are a new generation of metal bands, that refresh the scene?

Devil/Stian: I think all diversity, even if it’s based on retro, adds to the scene. Especially Ghost, even if I’m not a huge fan myself, is something the scene needed. Theatrical, catchy, mysterious and not least with a bit of quality. I hope they manage to follow up their first album. I love the fact that they piss so many people off without drawing the first blood. That’s a forgotten art. As for my favourites, I must say I hope Graveyard continues in the same way they’ve started. Great band, both on album and live!

Time for Metal/holopain: How difficult is it for a newcomer to establish in the metal scene and make a reputation?

Devil/Stian: If you have good songs: Quite easy. Look at Noctum signing for Metal Blade, Natur for Earache, etc. These are REALLY underground bands who has been noticed because of internet and good songs. I like to think that happened to us too, that people liked the music, not only the fact that we’re called DEVIL and has a goat in the logo. But that’s also a point: With the jungle of bands out there atm, you maybe MUST have something extra to stand out.

Time for Metal/holopain: I read about the common practice of „pay to play“, i.e. rooky bands have to pay a certain amount of money or buy 20-30 entrance cards ahead to a gig from the organizer prior to even playing. Are Devil as well affected by this practice?

Devil/Stian: Nope. We’ve done many jobs that doesn’t pay off, but we haven’t paid to play, besides travel expences and enormous amounts of alcohol. We’re not very restrictive on that part… As for the practise itself, I guess it’s up to everyone how they want to promote their own band. After all, all promotion has a cost. This is just a new way of using it. But I hope the organizers does it because they want to promote the music, and not because they’re after those money to put in their pockets. That sucks. There still are some assholes in the industry.

Time for Metal/holopain: What are Devil´s plans for the future? Do you want to play festivals or tour through Europe? How long will the contract with Soulseller records exist?

Devil/Stian: The contract with Soulseller is for one more full length. Anything we agree on doing in between, such as 7″ or splits, is not affecting the contract. Our future plans is to make MANY more albums, and do cool festivals. Maybe the occational small tour, but we’re really quite homebound, so I wouldn’t bet on DEVIL being a touring band.

Time for Metal/holopain: Thank you for the interview, now you have the chance to send some words to your fans.

Devil/Stian: Cool! We just like to thank everyone for showing their interest in DEVIL, and hope the album is at your liking. Also thanks to TFM for doing proper research before the interview. That’s what we like! And if you people out there ever meet us, never be afraid of saying hi. We’re always up for a drink and a chat!

All the best,
Stian

Diamond Head – Lightning To The Nations

Ceremonial Castings – Our Journey Through Forever