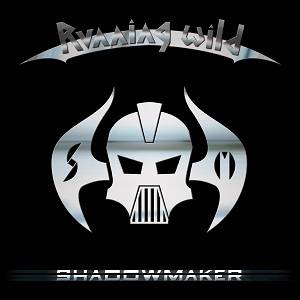 “The return of a legend!“

They’re back! Running Wild have finished their break of creativity and return to the year 2012 with a new piece of Pirate Metal. Singer and songwriter Rock’n’Rolf Kasparek proves his spontaneity and joy of playing as never before and Shadowmaker may show itself as being the best album the band ever produced. Let’s see what the ten songs and about 50 minutes in length will be like.

With the opener Piece Of The Action Running Wild gives us a song, that clearly shows, that the good old Pirate Metal still lives! Just in the style of the predecessors the song represents the groovy guitars and the pirate-voice of Rolf.

Riding On The Tide continues the melodic line of the album and it’s one of the pirate-hymns – as you easily can hear by the lyrics – which is typical for the band. But above all this the song is made to join since the chorus is pretty easy to learn and the music invites to some headbanging. Sailing Fire is another good piece of Pirate Metal, which also has some strong lyrics describing an epic adventure on the seven seas. The music of the song is very convincing, too.

I Am Who I Am is a song to join, too. It is a faster song with very inspiring music and a text to shout upon, which actually could be a motto for life. Another song to take part in would be Me + The Boys, which without a doubt is a hymn to the band itself. But I think Running Wild deserve this dedication to themselves for this glorious and impressing comeback!

The CD in general is filled with variety – whether it’s the drumming, the guitar playing or just the composition itself. Slower songs like Black Shadow and faster tracks as Shadowmaker alternate with each other and give the album that special Running Wild-feeling. But above all groove and pirate-lyrics are the main characters of the band and these have been transposed better than ever!

The song Dracula already sets an end to this strong work, but with a length of 7:39 minutes this track could go for two. The mastermind of the band, Rock’n’Rolf, didn’t even spend two hours to compose this song but anyhow it is a perfect ending of a masterpiece. The track causes a darker feeling than the rest of the CD, both lyrically and instrumentally, but it’s still played powerful. The composition of the song is very impressing since it builds itself up constantly – just like a huge wave just to fade away in the end and go back to the wild sea, where it came from. And at the end you stay left behind with the sound of rain dropping upon you, just like the fantastic impression of this album.

Conclusion: The Pirate Metal-legends from Germany have returned, better than ever! Running Wild have reached new marks with their masterpiece Shadowmaker and Rock’n’Rolf has created more groove and music to join to with his new spontaneity. Of course the roots of the band didn’t get lost and their main character - piracy - is still the main topic in the lyrics. Unfortunately the band has refused any rumors of appearance in 2012 – but a comeback has been impossible, too, and Running Wild have returned anyway! Recommended Songs: Every song!
Lennart L.
10
10